This should have been an enormous mainstream hit.  It has bags of fun, charm and wit.  Was built around an infectious sample of The Isley Brothers' version of Stephen Stills's composition, Love The One You're With.  It also had the backing of Will Smith behind it, who had befriended this young West Philadelphia trio and signed them to his production company, before pairing them up with the producers of Summertime.  The love of socialising and rapping; of sharing your gift in a convivial environment with friends comes off this track in waves.  It shares Smith's disdain for those who want to use rap parties as an excuse to get violent or those who put machismo above looking good, feeling fine and having a good time.  There is some neat social observation though about the difficulties of hailing a cab when you're black.  But its primary concern, as it says itself, is making toes tap, which it does effortlessly.  Though not enough for a hit single surprisingly.  They also parted ways with Smith at the end of the year, though he took the "Work that body, work that body" line and piloted it to Number 1 a year later.

Peel was taken by the reference to Skip to my Lou from Meet Me in St. Louis, a musical and song which I starred in with a Falmouth youth theatre group in 1995.  He had tried in vain to find a good version to segue into after Where's the Party?

Basically, The Isley Brothers WERE hip-hop sampling at one point

Videos courtesy of mintunderground (2 Too Many) and koollatter (Isley Brothers).
Posted by David Pascoe at 23:10 No comments:

This show featured a repeat of a Faith Healers session which had originally been broadcast on 11/1/92.  I only caught two of the tracks on this show: the rama-lama repetition of Hippy Hole and this rather enjoyable cover of ABBA's SOS, which gives the 1975 original a shoegaze makeover with feedback to spare.  It comes through as one of the more sincere efforts at "underground" covers of pop - see also things like the If I Were a Carpenter tribute album from 1994, which Peel despite his dislike for The Carpenters played tracks from.  Or you could compare it to Chumbawamba's (in)famous Peel Session comprised solely of covers of cheesy party songs in late 1993.

Peel was tickled by Th' Faith Healers choice of cover saying how much he enjoyed it when bands used the session as an opportunity to record something other than the latest single and three tracks from the forthcoming album.  I might have a higher opinion of Th' Faith Healers if they had chosen to go full Erasure in this session.  Considering that this session predates ABBA-esque by a couple of months, you could, at a push claim that Th' Faith Healers made the early running in a year which would see Erasure take an EP of ABBA covers to Number 1 in the charts and end with the release of Gold: Greatest Hits, one of the biggest selling compilation albums of all time.  It's clear, 1992 wasn't about Ebeneezer Goode, it was about Agnetha, Benny, Bjorn and Anni-Frid.

Videos courtesy of Vibracobra23Redux and ErasureVEVO.
Posted by David Pascoe at 23:06 No comments:

For nearly 30 years, John Peel, lest we forget one of the last generations of British people to do National Service, broadcast a show on British Forces Broadcasting Service, hereafter to be referred to as BFBS.  He followed a long lineage of broadcasters whose shows were transmitted to servicemen: Alan Freeman, Kenny Everett and Tommy Vance were among his contemporaries on the network, which began broadcasting in 1943 and remains in operation today, with a wide number of services throughout the world.

By 1992, Peel had had a weekly show going out on BFBS for 20 years, primarily being transmitted in the German part of the network.  In keeping with his shows for other European stations, the shows featured no sessions, but plenty of records and stories.  In keeping with, what Peel always referred to as "my domestic programmes", there was also plenty of worry in the background over Peel's future on the station.  In this show, he thanked the German listeners for getting the programme back on to its  old timeslot after it had been moved, leading some listeners to write to him asking whether the show had been discontinued.

His cold from his holiday at Center Parcs continued to bother him, but nevertheless he had enjoyed observing the comical lengths people had gone to in order to protect their hairstyles on water slides.  One track which didn't make my cut was Tumbleswan by Jacob's Mouse.  According to the music papers, the band had been arrested for trying to steal the No Fish Shop Parking sign.

The selections from this show came from the full 2 hour programme.  I was unable to find...

Cords - Such a Fool - and I can't tell you anything about the track as the recording was taken down.  I can remember them requesting Peel play a track which I initially included but later dropped...

Rapeman - Inki's Butt Crack - yes, it's allround funster Steve Albini and friends with a musical joke based on Mendelssohn's Hebrides Overture from Fingal's Cave and in keeping with most musical jokes, it's a tedious bore.  Peel anecdotalised about his usual beef with Rapeman in that he loved their music, but hated their name so much that he had once declined the opportunity to offer them a session as he couldn't face saying, "Here's another track from Rapeman" four times in a night.

For Winston the Ferryman.

Posted by David Pascoe at 00:32 No comments:

This wonderful piece of punk-pop, apparently recorded "in a frigging hole in the ground, Chicago" according to its liner notes was about 3 years old when Peel played it on this show.  I adore it for a number of reasons: the compellingly direct vocal performance from Jeanette Alfred and the virtuoso playing of Russ Forster, particularly that funky-punky duologue between guitar and bass going into the last 30 seconds of the track.  In our Instagram-anyone-can-be-famous-if-they-know-how-to-court-the-right-social-media-crowd world, I felt huge nostalgia for songs that focus their ire on starfuckers who would do anything to get through that gilded gate and into that gilded world.  The rarefied, super cool world that MTV once beamed into homes and lives.  Those impossibly glamorous and hip young things who didn't feel awkward walking around holding a stick microphone the size of a railway sleeper through the late 80s and early 90s while they talked to movers and shakers across what was either an ongoing snapshot of youth culture or a symbol of the McDonaldsisation of it, despite the best efforts of Beavis and Butthead.  Either way, it felt like something that mattered back then.  Now, the only access I have to music TV channels is when I go to my local barbers or the odd pub, and none of them are tuned to MTV, instead choosing The Box and other low calibre variations.  But what does it matter?  As Noel Gallagher remarked during his hilarious video commentary of Oasis' Whatever, "Who fucking watches videos (on TV) these days?"  I mean we could all do it through YouTube now, couldn't we?  Yes, but the point is, it was harder in those days.  You did have to have something about you to get onto MTV.  It seemed as though you had made it, regardless of whether you were a performer in a band, a solo artist or just one of the entourage.  How far would you go to get on it?

Jeanette Alfred was convinced that the price some people were willing to pay was too high.  She told me recently:
"MTV Girl came about when MTV was so popular and all the girls on these (channels) looked the same to me. I wrote a lot of fuck you type of songs though I was not a fuck you type of person. That is why, when Bikini Kill wanted me to sing on an album with them, I thought that singing was really not what I saw in my future.  I asked Michael (Cornelius, her husband at the time) to help me make it a song and we kind of put that song together. Everything has to do with the time back then like the line, "Dancing with Bruce" that would be Bruce Springsteen and "raped by Dee" would be Dee Sneider of Twisted Sister. Some videos must have alluded to that."

Jeanette went through quite a journey to get to recording MTV Girl after arriving in the US from her native Germany:
"I moved to the US (Arizona) in January of 1981 and was bored out of my mind. I wanted to return back to Germany but didn't have money. After a couple of years, I meet some punk-rockers and ended up marrying the bass player (Michael Cornelius AKA Michael Cx)  from JFA (Jody Foster's Army). Our house was the band house.  Every band and skaters who came to Phoenix to play, stayed at our place. I didn't know any of those people but remember the band names (Feeders, Red Hot Chilli Peppers, Black Flag, Tony Alva, etc). There is a group on FB that still keeps up with the scene from back then.

I was surrounded by music and Michael, my then husband, had a zine.  I wanted to do all those things too. I put out a zine in half English and German and helped design JFA's album cover. When I didn't get credit for it, I was kind of mad and said, "Forget you all, I can do my own music." So I started writing."

After her marriage to Cornelius broke up, Jeanette moved to Chicago and continued her musical adventures under the eye of a big favourite of John Peel's:
"I started recording with Russ Forster of Sponge. Our producer was Steve Albini. Steve is kind of a big shot in the Punk music business here in Chicago. I spoke to Russ last year to get all the tracks off of the remaining spools but we never made a definite plan. I will talk to him some more about it."

Jeanette currently manages a world music outfit called Kreyol Roots led by her husband. I'd love to hear a world music take on MTV Girl, a track which retains its relevance, even though its original targets are now more simultaneously widespread and local than ever.

My deepest thanks to Jeanette Alfred. 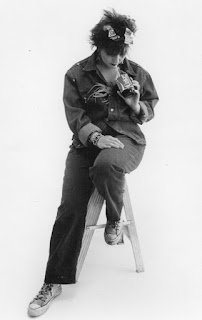 Looking back through lists of tracks written down months ago, it can be a dreadful feeling when you see a track title and realise that you remember nothing of it.  This is particularly true of foreign language tracks and on the page, Eloucha brought back no recollection at all.  There was no distilled joy as in the mid-section of La Joie de Vivre, no plangent ringing riffs from Leonore or even the wonderful coda to Ngonda from the same 15/3/92 show wending through my unconscious.  The lack of those instant associations made me wonder whether this would see the track fall from favour, but it romped it straight from the very start with an explosion of floor-filling joy like a Fanta bottle that's been shook up for an hour.  It's a fun track, swapping virtuosity for a kind of French-African soul music, complete with xylophone and comedy Italian phrases (though not in a Joe Dolce sense).  Even the synthesiser, always an obstacle to Peel's enjoyment of a soukous track feels right before the guitars come in to take us home.

Video courtesy of mrbobodigital.
Posted by David Pascoe at 16:14 No comments:

David Pascoe
Selections from the music John Peel was playing while I rehearsing and performing in shows throughout Cornwall between 1991-2004. This blog is small part am-dram reminsence, large part dream mix tape choice.