Just as Peel did, I present these 4 selections from the Sub-Pop compilation of Amphetamine Reptile acts, Smells Like Smoked Sausages  in a batch for your delectation.  Given that Nirvana parodying title, it's tempting to see this as a grunge collection only, but the choices themselves and the rest of the album too, are a bit more interesting than that.  Boss Hog give a blues makeover to Jody Reynolds's moodily twangtastic 1958 track Fire of Love, with its drawled female vocal and stabs of harmonica.  It's only in the turbo-charged coda, when that harmonica is turned into an instrument as rocking as any guitar that its place on this album makes any surface sense.  I suspect it may have been Peel's favourite track on the album, given that he re-played it at the start of his 4/4/92 show.  I can imagine him and Andy Kershaw approving of those modern
whippersnappers paying homage to Jody Reynolds.

The last time Tar were on this blog was with the thundering, if slightly ponderous On a Transfer.  By contrast, Deep Throw is a more exciting piece of music, but it escapes being lumped in as grunge through what appears to be a mix between hard rock and shoegaze, especially given the "Do you wake up dreaming?" refrain that keeps cutting through and lodging in the listener's ear.

Helmet offer a reminder of the source of what American guitar music was being celebrated for in 1992-93 with their cover of Melvins' track, Oven.  Their take on domestic passive aggressiveness is very faithful to the original, but
loses none of its unsettling sense of estrangement.

Vertigo's Dynamite Cigar has been bugging me because it reminds me of another record which I can't place. Curiously, I keep thinking it's a Half Man Half Biscuit tune.  Certainly they share the Wirral outfit's gift for quickfire verbiage as this tune is closer to rap'n'rock than grunge, though the vocals are disappointingly low in the mix.

Taken as a whole, none of these tracks or any of the others on Smells Like Smoked Sausages with the possible exception of Our Demise by Surgery looked like cracking the top of the Billboard charts, but as a snapshot of US guitar rock and insight into some of the bands' influences, it's an essential record.  Mind you, I recommend skipping the misanthropic album closer by God Bullies.

This has been a hard blogpost to write, because it's the first
one I have done since the sudden, unexpected death of my beloved cat, Saoirse, on August 19.  In the 3 years I've been doing this blog, she mastered the art of sleeping through whatever unholy racket I would be listening to near her, in the name of research.  These tracks are dedicated to her. 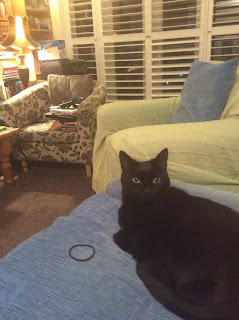 "You're not listening to Claws by Milk again are you?"

McIntyre riffed in that routine about how certain words go together without any thought given to what they definitely are.  Hoist with his own petard is another one, though as Angus Deayton once remarked on Have I Got News For You, it all depends on what a petard is.  And so we come to those who can be found in the fabled dens of iniquity - another combination of words which features one that is never seen without the other, or at least not until the mighty Yami Bolo comes along with the brilliant Iniquity Workers.

Having helped me trace an earworm from my youth on his last appearance on this blog, Bolo comes up with something truly special here, an attack on low level criminality especially where it works to stifle those who are trying to get out of poverty by honest means.  Drug dealers seem to be the specific target here because of the spells they weave on the young and vulnerable, and the death toll they contribute to.  Although cast as a lament and beautifully performed, there's a genuine anger that cuts through suggesting that Yami's God is a vengeful God and when Judgement Day comes there will be hell to pay for those offering a taste of heaven through a crack pipe.

Video courtesy of Dolemite
Posted by David Pascoe at 21:00 No comments:

Played by Peel on pressed purple vinyl, I'm dedicating this track by Houston band, Sugar Shack, to the woman I saw on the Tube in London on June 23 this year.  It was not a Brief Encounter moment - illicit romance was the last thing on my mind considering I was coughing my lungs out with some kind of chest infection, a mere 24 hours before my wife and I were due to leave for Portugal on a long-delayed honeymoon.  I would have preferred to be at home, packing, but had had to come into London for a job interview.  Considering my interviewers were coming down from Leicestershire and Yorkshire, I felt I couldn't really ask for a reschedule of the interview - not least because they had brought it forward for me before I went away.  The interview went OK, despite being conducted in the bar of a Travel Inn.  I was there for nearly 2 hours though, so was glad to start my journey home.  While taking the Tube back to Victoria, I was sat opposite a woman in her late teens/early 20s who stood out a mile amongst everyone.  On a pleasant summer's day, she was rocking some kind of summer Goth look, with boots that looked like they had come from Milla Jovovich's wardrobe from Resident Evil.  Her hair was dyed black, her lips were painted black, her eyes were almost submerged in black eye shadow, but what made her stand out were the tattoos.  She didn't have the kind of flowing body tapestry of interconnected squiggles, stars and quotes, much beloved of footballers - Luke Chambers, the captain of my team, Ipswich Town has progressed his own transmogrification from arms to upper thighs over the summer, though there are worse offenders.  Instead, this lady had tattoos dumped at random parts of her body, or at least where I could see them.  On her arm, on her knee, on her chest - there was no consistency or pattern to it.  Just random quotes, book titles and band names dotted about here and there with pieces of artwork cropping up in places where text would have been too cramped to fit in.  Written across her face, though not in ink form, was a great sense of vulnerability.  Despite the Goth/Punk look, she didn't look unapproachable, but rather more that if you approached her, she might crack and break apart in front of you.  If the tats and boots were intended as an armour defence, she hadn't quite grown into it yet.   I did what I always do when I see people celebrating their individuality/trying too hard (delete as applicable) and mentally speculated over what had led her into this extremity of look - rebellion against a repressive home life? A reaction to being bullied at school?  Falling under another's influence and trying to copy it?  - the possibilities were endless.  What was apparent though was that this was her.  Some old form of this woman had been jettisoned somewhere along the line and this was how she was going to represent herself for the foreseeable future.  And why not?  I may not have been able to stop looking towards her and constructing life stories in my imagination,  but to her, she wouldn't be seen any other way on that Tube train.  Her life so far has built to that look and if it's the right direction for her, then that is all that matters.

All of which cod-sociology leads me to wish that You're a Freak had been sound tracking the journey, not least because it might have brought a smile to her glum features.  Built around a classic sludge-
rock riff incorporating the guitar equivalent of that comedy trumpet "wah-wah-wah-wah" effect on the title line, this is a song which is by turns slightly awed of those with the black lipstick on and the chalk white faces, while mocking those looking on at them.  The chorus is a neat reversal of what the title implies - they don't know they're freaks not due to a lack of self-knowledge, but rather more appropriately because they don't give a damn. With its lines about freaks holding lattes* as they move obliviously through the streets, Sugar Shack are ahead of the curve when it comes to predicting hipsterdom but the sting in the tail comes through a false ending in which singer, Mark Lochridge, speaks the ultimate universal truth.

* Turns out I misheard Lochridge sing "light of day" as "latte" which takes away a little bit of the song's satirical bite, I feel.

PS - I didn't get the job. Serve me right for imagining alternative life histories...
Posted by David Pascoe at 21:25 1 comment:

Whenever Peel cued up a record as being "From the Kent compilation...", my interest would be piqued.  It usually meant there was a good chance of a fascinating slice of pure funk or soul following on.  For years I associated Kent Records with the best segue I ever heard on a Peel show.  On 27 June 2002, he followed Sandbar by Derrero with Woman to Woman by Shirley Brown, an almost perfect tonal matchup from the conclusion of the former to the beginning of the latter.  Shirley Brown's track was taken from a Kent compilation called If Loving You is Wrong, an album packed with intriguing titles like If We Get Caught, I Don't Know You (sung by a man naturally).  10 years before this, Peel was playing tracks from a reissue of an early Kent compilation called So Sharp which showcased the work of "Dyke" Arlester Christian and his band The Blazers.
In the late 60s, Dyke & The Blazers would have been the soul band of choice for anyone who feared that James Brown was becoming too indulgent or that Sly and the Family Stone was soul music for hippies.  In the age of Aquarius, they provided a home for displaced Mods and a soundtrack for the Northern soul movement.  Playing them in 1992 leaves me hoping that Peel would have inspired any of the soul bands who formed after watching The Commitments.  Not such a leap of imagination when you consider that Dyke and the Blazers' best known song was covered by Wilson Pickett, who (SPOILER) may very well have sung it with The Commitments if they hadn't broken up before he arrived at their last gig.

Posted by David Pascoe at 18:31 No comments:

David Pascoe
Selections from the music John Peel was playing while I rehearsing and performing in shows throughout Cornwall between 1991-2004. This blog is small part am-dram reminsence, large part dream mix tape choice.